The NHL Stadium Series is a brand new league initiative. After the massive success that is the Winter Classic for the league and the teams involved, literally every team in the league wants to host their own outdoor game. Yes, even the teams based in Florida, Phoenix and Los Angeles. With there only being one Winter Classic a year, and to a lesser extent one Heritage Classic every couple years, the NHL dreamed up the Stadium Series; a set of outdoor NHL games held around the end of January and into early March.

Like any good idea a well run business has, they’re beating it mercilessly into the ground. The NHL is taking the John Cena approach: push, push, push, push, push. And it makes sense.  The league gets great PR and marketing plus its set to make a boatload of money off the games (even though they’ll claim otherwise once they feel the need to cry poor again, like when they want new publicly funded arenas or a new CBA).

The games on the menu are:

It looks like there will be two quality games, the first and last, and two painfully unexciting games for hockey fans to enjoy. 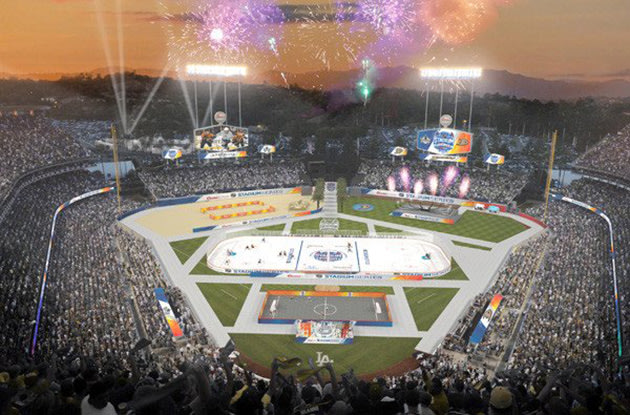 The Kings and Ducks are two of the leagues very best teams and, despite having never crossed paths in the playoffs recently, they have developed a nice rivalry. Both play physical hockey, have some extremely talented game-breakers and have excellent goaltending.

The Penguins and the Blackhawks are another two of the NHL’s best teams and they play excitingly fast paced hockey. The game is also set to feature some of the very best players in the world such as  Sidney Crosby, Evgeni Malkin, Patrick Kane and Jonathon Toews, as well as a host of other Olympians.

Duds? I would tell you the New York area rivalry games. The Islanders have been a massive disappointment this year after a promising playoff berth last season. The Rangers have had trouble sustaining any kind of high level play this season. The Devils have done everything good teams do this year except score goals, which has only made their traditional boring style even worse. But maybe having 3 poor teams playing against each other might actually lead to exciting mistake filled hockey. That is what I’m hoping for.

Strangely, the one thing I was most excited for concerning the Stadium Series is the new specialty uniforms the teams will be wearing for the occasion.

(For galleries and a better look, visit Icethetics)

I love when teams, in any sports league, debut new uniforms. For the most part, they look good enough. I could live without the half striping on the sleeves. I do like how much bigger the crests are compared to regular sweaters. Also, note that shoulder patches only appear on the left shoulder. I’m sure someone at Reebok spent way too much time and money on that concept. Individually, let’s run down these threads real quick.

Anaheim Ducks – Too much orange and I hate sweaters without waist stripes, especially when nothing else is happening.
Los Angeles Kings – I think they look great. The full uniforms – pants, socks and gloves included – look excellent. Plus a grey base is totally new and original to the NHL.
New York Rangers – Good enough. I was hoping the Rangers would actually use their logo instead of a wordmark for the first time since the 1970s.
New Jersey Devils – I love the retro red and green design even though it is just their St. Patrick’s Day sweater.
New York Islanders – A great shade of blue and a new logo, plus the entire uniform looks amazing.
Pittsburgh Penguins – To me there is something not right. I don’t know what it is. Maybe its because it is hard to make a good white jersey.
Chicago Blackhawks – Essentially their 2009 alternate uniform. Not much else to say.

Getting back to the event I think ultimately its a smash…

…For now. There is such a thing as too much of a good thing. Early tickets sales support this. I can imagine this conversation amongst the Rangers players this year.

“Ugh, can you believe we play two outdoor games this week?!”

But I guess jeopardizing the integrity of the competition on a crappy playing surface isn’t something the NHL worries about considering that the loser point and the shootout continue to exist.

However, it is the first time for the Stadium Series, so I can let it slide. But seasonal menus don’t happen all the time because the rarity is the allure. The limit is what makes them exciting. I hope the league scales it back, or spreads out the involvement better, in future years or they risk exhausting their golden goose.

So that was the first Smash or Pass. I hope you enjoyed reading it as much as I enjoyed writing it. Make sure to check back in the future for more editions!

Football News 24/7
Floodlight Failure At Arsenal Vs Coventry Forces Fans To Light Up Emirates With Mobile Phones
Roger Goodell Getting Rid Of Extra Points – Why Fix What Isn't Broken?