We’re in March and that can only mean one thing: College Basketball takes over.

In the busiest month of the season, we have taken a look at the teams you have to watch out.

Here are five sides to keep an eye on in the NCAA tournament: The outright ACC regular season champions are not getting a lot of publicity and they like it that way. Tony Bennett has come up with a similar system and personnel like Brad Stevens had at Butler in 2010 and 2011 when they went to back-to-back National Championship games. Their overall team stats do not jump off the page at you but what Virginia does is make you play their style of basketball and they do a really good job at it.

Led by senior guard Joe Harris and sophomore guard Malcolm Brogdon, the Cavaliers will smother you on defense, not turn the ball over, and hit timely shots that suck the wind out of you. If the Cavaliers win the ACC tournament, it will most likely solidify them as #1 seed in the tournament and they most certainly have the pieces to make a legitimate run to Dallas for the Final Four. Oklahoma State was a top five team coming into this season and are very talented. They had some off-court issues, as well as some suspensions to deal with this year and found themselves on the bubble just a few short weeks ago. After Marcus Smart got suspended for pushing a spectator, things were looking gloom for OK State but they weathered the storm during that three-game stretch and when Smart returned they won five straight and almost solidified a spot in the big dance.

The Cowboys will most likely be between eighth and 10th seed in the tournament. They have NBA-caliber players in Smart, Markel Brown, and Le’Bryan Nash. This team can score the ball too as they averaged 80.7 PPG, which ranks 16th in the entire nation. The Cowboys are going to be a tough out and if they fall on the eight/nine line and win their first round game, I feel sorry for the #1 seed in that region because Oklahoma State will be a lot to deal with after only one day’s rest.

Look for Oklahoma State to make the most noise out of a team seeded eight or lower. The Ducks have been on a serious roller coaster ride all season long.

They started out the season on an absolute tare going 13-0, then things fell apart early in Pac 12 play as Oregon dropped eight of its next 10 games, starting Pac 12 play 3-8. Since then the Ducks have reeled off seven games in a row including a season finale win against Arizona.

The Ducks are as hot as any team in the country right now and should most certainly be feared heading into the Pac 12 tournament and the NCAA tournament. Oregon is led by junior guard Joseph Young who scored a shade over 18 PPG and senior forward Mike Moser who checks in at 13.7 PPG.

This team keeps attacking you and is relentless in its attack. As a team they average 82.3 PPG which is good for ninth best in the country, they also are in the top 65 in assists per game and field goal percentage. This team can really go and when they are playing good basketball as they are right now they are as tough an out as any team in the country. 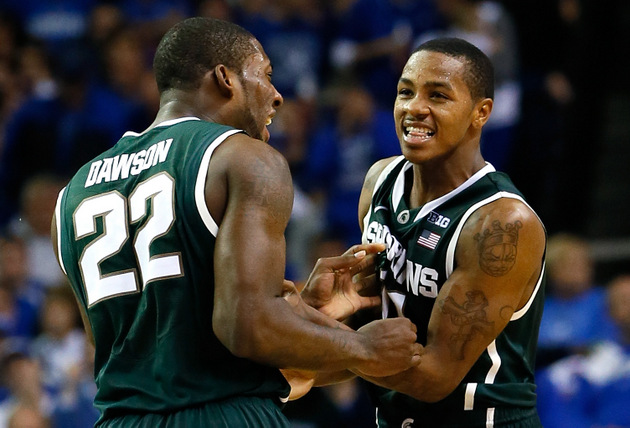 Sparty has had an up-and-down time of it this year. They stared the year as a pre-season top three team but were then plagued with injuries and fell off for a while. The good news for Michigan State is they are getting healthy at the right time and as we all know all too well you can never count out Tom Izzo and Michigan State.

This team is led by seniors Keith Appling, Adrien Payne, and sophomore Gary Harris and, when they are all clicking, the team is very dangerous. Even with all the struggles and injuries Michigan State battled to a very respectable 12-6 in the Big Ten as they gear up for the Big Ten Tournament. They rank sixth in the country in assists per game, averaging 17.2 a game.

Since 1999, Michigan has appeared in the Final Four six times and every college senior has played in a Final Four. They look to continue that streak as seniors Appling and Payne ride off into the sunset.

The X-factor for this team is Branden Dawson, who actually injured himself by punching a table while watching film of a loss in a Big Ten game. He has returned since then, playing in Michigan State’s last two games and leads this team in rebounding. If he comes into the form he was playing earlier this season Sparty will be extremely tough to deal with. Teams will be cringing on Selection Sunday hoping that Michigan State does not fall in their region. People tend to forget that Harvard actually won a game in last year’s NCAA tournament as a 14th seed. Well, the Crimson are back in the dance after ousting Yale in the Ivy League and their top six players were all on the team last year that beat New Mexico in the tournament.

This team comes at you with a balanced attack as five of the top returning six players last year all average in double figures scoring (Wesley Saunders 14 PPG, Siyani Chambers 11.1 PPG, Steve Moundou-Missi 10.5 PPG, and Kyle Casey & Laurent Rivard average 10 PPG). Tommy Amaker has a balanced team and can give people fits, especially if you sleep on them.

Look out for Harvard to recreate some of the March magic they made last year.

Enjoy Watching and Betting On Sports? Here’s Why You Should Be Betting Online, With Your Mobile

Paul Pierce Signs 1 Day Contract to Retire as a Celtic

Video: Michael Jordan Reveals Who He Wants to Be in Space Jam 2… and it’s Not LeBron James