I love NHL playoff hockey. Best teams versus the best teams. Teams going all out because all the chips are down. Players leaving it all on the ice. Shooting, hitting, saves, scoring, blood, sweat, tears, emotion. And the Western Conference is going to be absolutely brutal this year.

Even better is that I do not think you can positively say that any team that loses in the first round would be the victim of an “upset”. Every team in every division is so close it almost is not fair to you gambling folk out there.

So to prepare for the best two months of NHL hockey, why not make predictions? I mean, no one gets these right. Ever. TSN used to have a monkey spin a wheel and it nailed more correct outcomes than the “experts.” And I’m not an expert, nor am I a monkey which leaves me in between somewhere so obviously I know more than people who get paid. 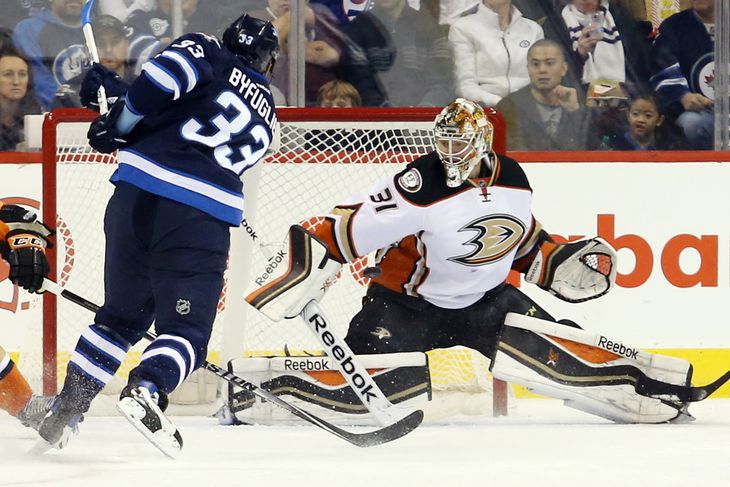 Poor Anaheim. You bust your butt all season to win the division to clinch home ice for at least 2 rounds, assuming you make it, and you have to fly all the way to Winnipeg for your first round match up. #travelwoes

Why Anaheim can win: They were the best team in the Pacific this year and it wasn’t necessarily close. They also made a number of smart improvements to their team at the trade deadline with James Wisniewski, Simon Despres, Jiri Sekac and Tomas Fleischmann. Those additions allowed for a whole lot of increased depth to a team that was relying maybe a little too heavily on youth. They play some of the best “big boy” hockey in the NHL and have some of the best center depth among western playoff teams. Winnipeg cannot match their top two centers, Ryans of Getzlaf and Kesler, in terms of ability.

Why Winnipeg can win: There are very few teams in the NHL that can match up and play big boy hockey with the Ducks, but the Jets are one of them. Dustin Byfuglien has the ability to take over a game, and the rest of the Jets’ defence is also filled with behemoths like Tyler Myers and Jacob Trouba. Offensively they are quite deep with 6 different forwards scoring more than 41 points this season. Hot goaltending goes a long way and Ondrej Pavelec closed the year with three straight shutouts. Also, Anaheim’s goal differential was only +7 this year and they were 33-1-7 in one goal games. That makes the Ducks look vulnerable.

Pick: Jets in 7 games
This is the only real “upset” I can see this year. The Jets match up well in terms of size and depth. The only thing holding the Jets back may be goaltending. A lot has been made about the Jets’ disciplinary issues, but since when do they call penalties in the playoffs? It’s going to be that series what has four games go into overtime. The ‘Peg will go absolutely nuts. That’s fun.

Two teams that most people didn’t have making the playoffs get to meet up and guarantee a fun in a Western Canada matchup. “One of these teams will go on to the second round” something you will never have heard in October.

Why Vancouver can win: The one thing that the Canucks have more than the Flames is a second line with Radim Vrbata and Nick Bonino. Shutting down the Canucks top line can be done by TJ Brodie and Mikael Backlund, but the Canucks, healthy, have a significantly better bottom-nine. The Canucks have a healthy top pairing with Alex Edler and Chris Tanev, and can roll out experienced veterans such as Kevin Bieksa, and Olympians Dan Hamhuis and Yannick Weber. The special teams are heavily in the Canucks favour and capitalizing on the few powerplays you get in the playoffs can go a long way.

Why Calgary can win: They’re a very efficient 5 on 5 team this year. They do not take penalties and they performed better offensively at even strength than the Canucks did. And while they are a poor possession team, something that is generally quite predictive of playoff success, its more on their ability to create consistent scoring chances, as they’re very strong at preventing scoring chances. Their secondary scoring this year came from their defence which can be more difficult to shut down than a line of forwards. They could fall into that “too young to know any better” category for the playoff experience, as their offence is led by sophomore Sean Monahan, rookie Johnny Gaudreau and veteran Jiri Hudler.

Pick: Canucks in 6 games
I’m not feeling the Flames ability to be able to play hard matchups across a whole series without Mark Giordano. Both teams feel like they’re smoke and mirrors, but I feel the Canucks are a little bit less this season. Home ice should help give the Canucks the cushion to win. 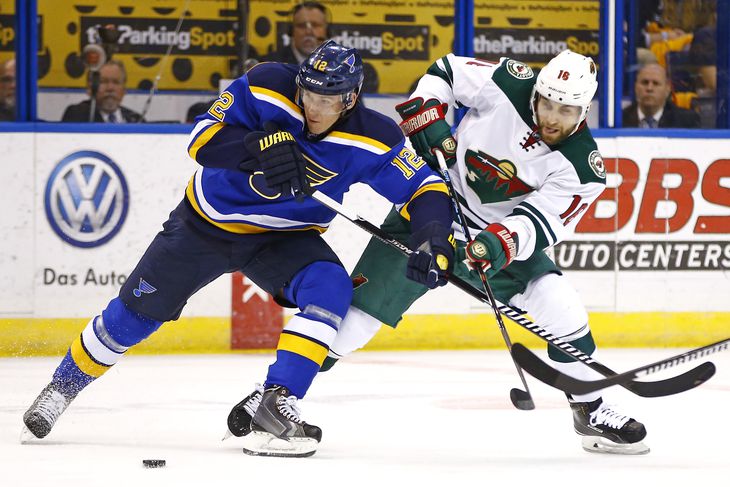 Congratulations St. Louis, you won the central division. You get to play… the best team in the NHL since January that employs an impossibly hot goaltender. Flip a coin, ladies and gentlemen.

Why St. Louis can win: They are really big and really deep. They’re a team that on paper is designed for playoff hockey with size, two-way skill, scoring and a mean streak. For whatever reason, they’ve never been able to get it done as they usually get outmatched at center. However, rolling Alex Steen-David Backes-Paul Stastny down the middle is tough to top and Vladimir Tarasenko is the game breaking scorer they’ve never had.

Why Minnesota can win: Devan Dubnyk. He has been on fire all season, stealing games and putting himself into the Hart Trophy conversation. Why can’t that play continue? They have a top center and winger with Mikko Koivu and Zach Parise that can pair up offensively and defensively against any the Blues can play. Thomas Vanek, Nino Niederreiter, Mikael Granlund and Jason Pominville are terrific scorers who can break the game open.

Pick: Blues in 6 games
I do not like the Wild’s defence after their top pairing, especially compared to St.Louis. I think the Blues can just roll more of a 4 line attack than the Wild can and can see them getting to Dubnyk over the course of a series. He started to show cracks near the end of his 38 starts in 39 games. The quasi-dynasty in all-out go-for-it modethat is on its heels a bit versus the outta-nowhere underdog that is extra underdogging its way into the playoffs on 6 straight losses.

Why Nashville can win: They key to winning in the playoffs, is depth. It generally always has been because depth can help offset any injuries. Solid depth also can help negate the impact of a few lucky bounces. What I am getting at here is that the Preds have great depth 1-12 at forward, and a defence that can go toe-to-toe with any in the Western Conference led by Shea Weber. Oh, and the best goaltender in the Western Conference. That has to count for something.

Why Chicago can win: They’re still the best team in the NHL to me. They’re 12-14 deep on offence, 6 deep on defence and have good enough goaltending. This is the same team that was a goal away from the Finals last year, and has only improved the roster. It’s also the last go for a lot of this group due to salary cap complications next season. Also, Patrick Kane, he of the MVP calibre season pre-injury, should be back in the line up for game one or two.

Pick: Blackhawks in 5 games
The Preds early season magic of insane goaltending and surprising offence seemed to abandon them over the last two months of the season. And despite their depth, it isn’t Blackhawks depth. Really isn’t a worse team they could have played in the first round. The Central is just a brutal conference to play in.