Wimbledon champions Andy Murray and Serena Williams have won the same prize money recently but the row continues over why male sports stars still tend to earn more than women. Javier Yap talks to Olympians about how gender affects earnings from sport and analyses the data from a range of sports.

Tennis number ones Serena Williams and Novak Djokovic are fighting it out – not on the court but int he row over equal pay.

The parity in tennis Grand Slam prize money is still causing controversy with opponents arguing that it is unfair to men who play for longer and attract bigger audiences. Popularity in the form of viewership as well as physicality, represented through the time spent on court are the two main factors that are argued between the two sides in pay equality in tennis.

The CEO of BNP Paribas Open (Indian Wells) tournament, Raymond Moore commented during a press conference in March that female tennis players in the WTA  “ride on the coat-tails of the men.” He then added, “They don’t make any decisions and they are lucky. They are very, very lucky. If I was a lady player, I’d go down every night on my knees and thank God that Roger Federer and Rafa Nadal were born, because they have carried this sport. They really have.”

Women’s world number one, Serena Williams retaliated in defence of not just her fellow professionals, but all women. “There’s only one way to interpret that. Get on your knees, which is offensive enough, and thank a man, which is not – we as women, have come a long way. We shouldn’t have to drop to our knees at any point.”

Men’s world number one, Novak Djokovic added to Moore’s comment in saying that he believes men should fight for more pay with one of his arguments being that men have more spectators than women in tennis tournaments. Indeed his point that men have a bigger viewing is correct. Aside from Grand Slams, in 2015, Association of Tennis Professionals (ATP) [men’s] events received 973 million viewers digitally, 40% more than the 395 million in the Women’s Tennis Association (WTA) events.

Fortunately for women in tennis, the sport has been one of the few where women receive equal pay checks to men. In 1973 tennis icon, Billie Jean King advocated equal pay when she created the Women’s Tennis Association (WTA) and in that year, the sport saw the U.S. Open as the first major tournament to reward both men and women equal prize money. This has been a turning point for pay between men and women in the tennis world.

As shown from the graph above, women tennis players win the same prize money as their male counterparts. Comparatively to other athletes in other sports, female tennis players’ athletic achievements rival the men, and they earn more money, endorsements, and notoriety.

Although the proportion of female athletes across all sports equates to 40%, it is reported by American based, The Tucker Center for Research on Girls & Women in Sport that their sport media coverage levels stand at a mere 4%, significantly less than that of the men.

More than double the number of people who tuned into the ladies’ final of Wimbledon last year between Serena Williams and Garbine Muguruza (4.3 million) watched the men’s final between Novak Djokovic and Roger Federer (9.2 million) the same year in the UK on BBC alone. On the other side of the world, 1.2 million viewers in Australia tuned into Channel Seven’s coverage of the men’s final, half a million more than the 700, 000 viewers for the women’s final.

The 2015 Wimbledon men’s final between Djokovic and Federer also set the new record of live tennis minutes watched in a single day in the US (Williams’ home nation) via ESPN’s network.

However, there have been occasions where the women’s matches have recorded higher popularity numbers.  For example, the U.S. Open final in 2013 and 2014 had higher TV ratings than the men’s. Furthermore, the 2005 Wimbledon final between Americans Venus Williams and Lindsay Davenport had more than 1 million more spectators watching from home than the men’s final contested between Roger Federer and Andy Murray.

Member of the ATP Player Council, Gilles Simon said to a French radio station that he is well aware of the struggle that women face for equal pay but says that “it just doesn’t work in the entertainment business because entertainment is not about being a man or woman. It’s about the public coming to watch you or not.”

He also says that he is with Andy Roddick in saying that “based on any other business in the world, the more you sell, the more you make.”

However, Serena Williams publicly challenged this statement saying that at the age of two, she started playing tennis and “I’m sure he (Gilles Simon) started when he was two years old as well.” She also added that she has worked just as hard as the Frenchman and “I’m sure he continues to work hard as I work hard, as well as everyone that’s on a professional level.”

Despite the points from both sides of the issue, is it fair to argue that having a larger number of viewership should directly correlate with the prize money distributed?

The other key factor that is talked about often when debating on the issue is the time spent on court. Statistics from the winners of last year’s Wimbledon Grand Slam show that Novak Djokovic spent 960 minutes on court whereas Serena Williams had to endure 631 minutes. That’s 5.5 more hours on court for the men’s  champion.

As the requirement of women’s Grand Slam tennis matches is to win with two sets compared to the three for men and considering competition of the highest professional standard, the basic consensus is that women’s matches will have shorter game lengths. However, it could be argued the longer time spent on court by women in any tournament round could not be possible without the similar levels of endeavour, intensity and overall quality also found in most men’s matches. Speaking in fairness, this type of entertainment as was on show in the 2016 Australian Open women’s final between Serena Williams and Angelique Kerber is a key factor in large match attendance on any given day. Therefore, to question the validity of women’s prize money would be to dismiss women’s abilities and potential to perform at these levels.

It could just be that the lower ranked men’s players generate more income and appeal than the lower ranked females, while no real difference actually exists between the higher ranked players of both genders. Athletes are paid for winning, not for how long it takes to get a result. 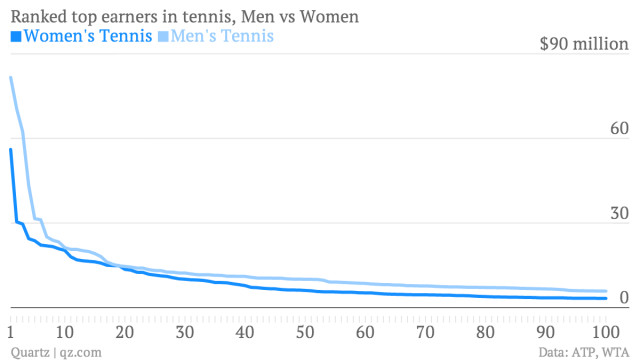 The data above, it illustrates that the top 100 men players earn higher wages than their respective ranked female counterparts.

I caught up with two Olympians, British 400m runner, Martyn Rooney and Australian badminton player Sawan Serasinghe to get their views on the issue of unequal pay between female and male athletes.

Two-time men’s 400m European Champion, Martyn Rooney says that in athletics, the amount of attention and financial support from sponsors  is the same for men and women. Having said that though, he states “I do believe that the men should be paid more in tennis as they play for longer and attract larger crowds.”

In badminton, the prize money received by both men and women are the same. Sawan Serasinghe who will be representing Australia in his first Olympic Games in Rio De Janeiro in August says that there are valid arguments from both men and female about equal pay in all sports.

Speaking about badminton specifically, he states, “It’s hard to argue about the duration spent on court because both play for the same amount of points unlike tennis.”

He feels like for some major tournaments such as the BWF Superseries, they tend to advertise players like Lin Dan and Lee Chong Wei more as a selling point to attract fans over most of the female players. This is because they alone have been very successful in their discipline for the last decade or so and that can be compared to the likes of tennis stars, Roger Federer or Rafael Nadal.

“I know generally speaking to fans and friends who have turned up to the Australian Open Super Series in the last few years, they are always looking forward to watching either Lin Dan or Lee Chong Wei.”

If prize money for athletes is given on the condition that they win, then the argument that equal pay should not be adopted for men and women should be deemed inadequate.

Although women are lucky enough to receive equal pay in major tournaments, women in some other sports do not even come close to receiving the same pay check as men.

The women’s USA soccer (football) team only earned a portion of the sum ($2 million) for winning the women’s World Cup this year compared to what the German men’s team pocketed ($35 million) from winning the 2014 World Cup.

In other sports, a survey conducted by the BBC shows that 25 of 35 sports have an equal amount in prize money between men and women. Although this shows that many sports have come to terms with making it fair in pay, there are still some sports which do not pay equally and in saying so, there are some with big differences in the amount of money received for men and women.

Statistics from the study found that the difference in pay for winning a major tournament is biggest in football (soccer), followed by cricket then golf.

Football is a sport where the men clearly dominate the prize money as well as salary payments. The winners of the 2014 men’s World Cup received  £21.37 million more than the winners of the women’s 2015 World Cup.

Equal pay between men and women has been debated for many years and still is a topic of interest today. In tennis, female players have changed history by having equal pay to their male counterparts in all four Grand Slams. However, there have been many arguments to challenge why women should be paid equal to men in terms of number of viewers between men and women players and the time spent on court. Overall, tennis is only one of the many sports that have fought hard to have equal pay between the sexes, whereas other sports such as football (soccer) continue to have vast discrepancies in this issue. However, whether pay is distributed evenly between genders across sports or not, the heated topical discussion is likely to remain relevant.