The NHL, like any sports league, has its share of absolutely dreadful uniforms. Strange colour choices, weird designs, random stripes, etc. Visual mess that players wear and fans buy out of loyalty. But it doesn’t have to be that way! I’m fixing the NHL, again.

I’ll only be picking on teams that are due for a change. As in, they have yet to make a recent fundamental adjustment.

You’re about to learn just how big a fan I am of classic looks.

Yawn. Look like every other generic dark blue sweater used in the NHL. Bland colouring leads to absolutely no visual pop and a brutal logo design. Unfortunately, they’re too new for the team to change anything into anything half appealing. 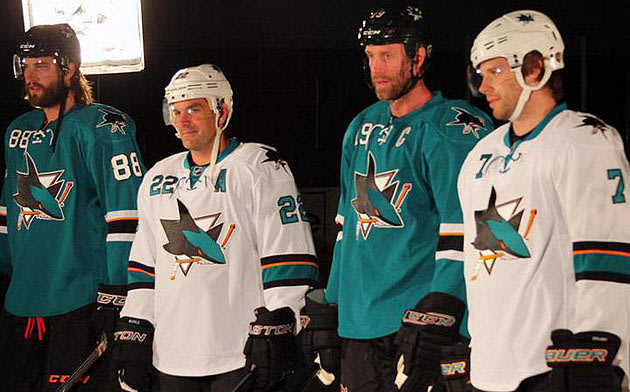 Absolutely nothing going on. Almost as bad as the old Oilers’ sweaters, but at least the teal is bright. Unfortunately, these things are barely a year old so they’re here to stay and continue to be horribly uninteresting.

It’s close (main sweaters on the left and right), but would it really hurt just to actually give the fans the classic 70’s sweater? That is what they want. That is what everyone wants. These are a little boring and dark, with unnecessary piping and thin striping. I want piping to die. I don’t want to talk about the Turd Burger third jerseys. These are just boring. There is a disconnect from the logo to the sweater. The storm flag design around the base was great, but the rest of the shenanigans were unnecessary. The red knocks off 2010 Olympics Team Canada and the white, well, it isn’t actually that bad. It’s missing a little storm flag inspiration, but its pretty good.

The Canucks, with a poor uniform?! A shocking statement.

The colours and striping is really good. Blue and green, and its variations, really just fits into the pacific northwest.

But the “VANCOUVER” needs to go. It has to go. We know where the team is from. I get that it was done to shill the sweaters during the Olympics as souvenirs, but it’s been four years since then, and these sweaters are almost 8 years old. The logo also doesn’t match the colour anywhere else on the sweater. Why?! Please fix it.

Its simple, and right there in the team’s recent history. The third sweater should replace the home, and wear the 40th Anniversary sweater on the road. They’re both leaps and bounds ahead of the current get ups, and they’re not “new” either which is a lifesaver for the Canucks.

They can get away without them, sorta, on the white sweater because the pants break up the look. But on the home sweater, it just looks like something is missing.

Also, the lack of the sand anywhere on the sweater, even in a minor capacity, creates a disconnect in the logo. Reminds me of sweaters I see in rec leagues where the logo carries a bunch of extra colours, then the sweater it is on is two-tone.

Those waist stripes do so much for the design. Breaks up the middle of the body and removes the pajama-style onesie look. Add in a little bit of the sand colour to the stripes, or replace the white with it. It’s honestly barely even a change and with the team looking to rebrand as “Arizona” this would’ve been a great choice to do before the season. Maybe their newest owner will see a change through.

How does a team that’s had a pretty decent uniform history get something so wrong? I keep seeing McDonalds french fries every time I look at these, and it’s the fault of those dumb vertical waist stripes.

Also not digging the ‘A’ being flame designed, but the ‘C’ being just a ‘C’. Disjointed.

The alternate sweater is also bad. It goes for a classic college style look but it really only goes half way.

They had it! They totally had it! Look how good things can be without black! Their retro third uniform design was perfect. It gave me a raging hockey boner. It’s vibrant and no other team in the NHL has the same combination of colours. In a league with so much black and navy, this was such a breath of fresh air.

Just so boring. I’m actually okay with black for the Penguins, and I usually hate black because it’s so dark and doesn’t really have any visual pop. The Vegas gold with the black is unused and the Penguins have made it their thing.

But the pattern needs an overhaul. It’s like they dipped the sweater sleeves in black and gold and went “Meh, looks good enough” and went home for an early day.

They’ve already done it. And they’re bringing it back as an alternate sweater this season.

Now, I like the fact that the Pen’s use the Vegas gold, and are basically the only team to do so. Swap the yellow (kind of Bruins-y) for the gold and this would be terrific. Blend of the teams first Stanley Cup sweaters and their most recent win.

Talk about bland. The logo sucks. It’s trying to be 3D, with the spartan “looking at you” but it comes across really minor league.

The striping sucks, and follows pretty well the exact same lame template that Tampa Bay and Pittsburgh used after the Reebok Edge redesigns (and reportedly considered by Vancouver as well).

The socks also don’t match the sweater since they’ve changed from the angled striping to standard “block” striping.

The O design is so good, and so unique. The only sweaters in the league that this vaguely resembles is the Montreal Canadiens road sweater, and that is being absurdly generous. Unique, classic, simple, and striking. I love unique designs. (Red concept design credit here)

Kind of cheating with this pick, as they did “change” their uniforms by eliminating some piping and the “apron” stripes in 2012.

The rest of the uniform just sucks so much suck though. Red, yellow and navy really don’t blend that well. They look fine on the white uniform, but on the red the definition of colours gets lost.

They also have those god awful half sleeve inside striping on the elbow. What the hell is that?

This general layout was really popular after Reebok Edge (Edmonton, Colorado, Columbus, Nashville, and Washington also used the same kind of full yoke and style), but its time for it to go.

The Panther’s don’t have a strong design to fall back on, and its part caused by their colour combination just not being the most appealing. But once you swap the yellow for gold, it begins to mix better and look less like the sweater was coloured in by sweater markers. Also, their logo uses gold and not yellow which ties the accents together nicely. (Image credit)

The Avalanche remain the hardest hit team by the Reebok Edge redesigns. They had a unique design and now they have these… things that look like they could be the cheap designs Walmart sells that are all screen printed without any stitching.

Apron stripes. Why! Euch. They make your ‘C’ and ‘A’ designations for your captains look absolutely terrible. It’s just a mess of something happening on the sweater.

The blue and burgundy look terrible on the sleeves as well. They don’t pop at all when next to each other. The socks also don’t match with their large stripes with grey compared to the thin stripes and non-existent grey on the sweater.

The third sweater is awful. Goes for college style, comes off like a 12-year-old made them for his EASHL team on NHL14.

Fixing sweaters generally isn’t difficult business. Make it look like it came out of the 70’s or 80’s. For the most part, not looking at you Vancouver, everyone loved the uniform designs back then, and lots of teams are going back to “retro” inspired designs (Buffalo, Dallas, Edmonton, Los Angeles, Minnesota, New York Islanders, Philadelphia, St. Louis, Tampa Bay). So since you weren’t around, fake it.